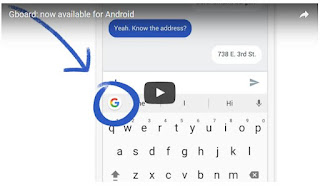 A few days ago, we told you that Google Keyboard had been renamed Gboard and would soon be available for your Android powered device. Today, we have some good news. The Gboard app can now be downloaded and installed directly from the Google Play Store. The keyboard has a number of features built right in such as Glide typing (that's when you spell out words by swiping your finger along the screen. Google Search is also integrated into the keyboard, although you will need to turn on the feature inside the keyboard settings.

Other features include emoji and GIF search, and multilingual typing allows you to quickly change the language you're typing in. With the app, voice typing allows you to dictate your emails and texts; if you have a large-screened device, the one-handed mode allows you to pin the QWERTY to the left or right of the screen.With support for 36 new languages, Gboard now works with 120 different languages overall.